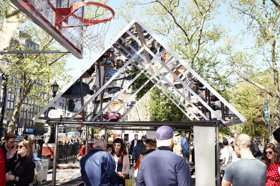 The New Museum is pleased to announce the fourth edition of IdeasCity New York, taking place Saturday, September 16, 2017, at Sara D. Roosevelt Park on Chrystie Street, one block from the New Museum.

A notable feature of this year's IdeasCity is an open arena of modular structures, designed by Thomas Lommée & Christiane Hoegner/OpenStructures, which will serve as the site for a public forum. The staging is made possible by IdeasCity's design partner A/D/O, a creative space in Greenpoint, Brooklyn, dedicated to expanding the reach of design.

"Art, design, and culture are often perceived as superfluous luxuries that are somehow less essential to civic life. In the last two years, observing the work of artists, architects, activists, and citizens in Athens, Detroit, and Arles, we've learned that there is a more urgent need than ever before to place artistic practice at the center of future thinking about urban life, and that the results can be incredibly inspiring," said Joseph Grima, Director of IdeasCity.

"Like the New Museum itself, IdeasCity is a global initiative with its roots in the Bowery neighborhood, and we're especially pleased that the fourth edition of IdeasCity New York coincides with the fortieth anniversary of the Museum. Over these forty years, our commitment to the city has broadened in scope, and this will be reflected in the diversity of the propositions presented," said Lisa Phillips, Toby Devan Lewis Director of the New Museum.

As IdeasCity looks forward to its next two-year cycle of global residencies across three cities, the Rockefeller Foundation will provide a new level of support with the establishment of the Rockefeller Foundation Fellows. The Fellows have been a distinguishing feature of IdeasCity, with more than 3,000 candidates having applied for the programs in Detroit, Athens, and Arles. As cultural practitioners, the Fellows partner with local communities and engage in an intense research and development residency. A selection of the Fellows' work from Detroit, Athens, and Arles will be highlighted at this year's IdeasCity New York.