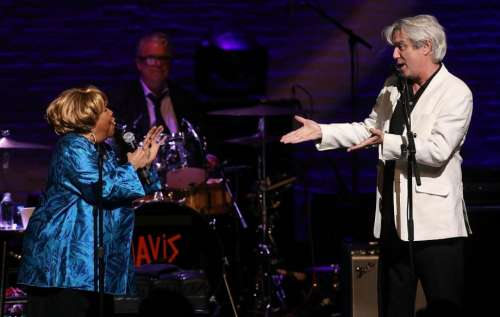 David Byrne performed Talking Heads‘ ‘Slippery People’ with Mavis Staples during her 80th birthday celebrations. Check out the footage below.

The soul icon marked reaching the milestone age with a special show at New York’s Apollo Theatre on Thursday (May 9). Taking to the stage to pay tribute at the Harlem venue were the likes of Maggie Rogers, Norah Jones, and Warren Haynes.

Byrne also joined Staples onstage at the special event, with the pair having a longstanding musical connection. ‘Slippery People’, which features on Talking Heads’ 1983 LP ‘Speaking In Tongues’, was covered by the Staple Singers a year after its original release. Byrne himself played guitar on the rendition, with Staples also going on to cover the track with Arcade Fire.

�� Mavis Staples with David Byrne at the Apollo �� pic.twitter.com/tSkJIRS4ZE

Appearing onstage together this week, Byrne and Staples faced towards each other while exchanging nonsensical sounds and smiles. Staples’ backing band then kicked in as the legendary artists sang the track.

The celebratory evening concluded with all Staples’ guests returning to the stage for a cover of The Band’s track, ‘The Weight’. See the video above.

Meanwhile, David Byrne has recently been asked by Dumbarton FC if he’ll buy a brick at the Scottish side’s new stadium. The singer was born in the Scottish town in 1952 and lived there for the first two years of his life before relocating to Canada.