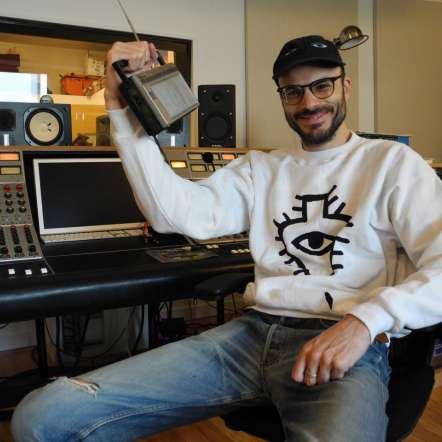 For the next couple of months, we at Luaka Bop will be taking over the radio here at Davidbyrne.com.

To spice things up a bit, we thought it would be fun if we passed the mic on to people we’ve been lucky to meet or work with in some way—who we find very inspiring and whose stories and music selections hopefully can be of inspiration to you.

For this first month’s edition, we are starting with a beautiful mix made by the French artist, producer, and DJ, Joakim. Tall as the Empire State Building and skinny as a rail, Joakim always has a sweet, wry smile on his face. He recently moved to New York from Paris, where he’s been running his own record label, Tiger Sushi, for the past fifteen years. We met up at his lovely new recording studio in Brooklyn, Crowd Spacer, where he’s still unpacking boxes of vinyl records and keyboards in-between studio sessions and touring his new album and live show. 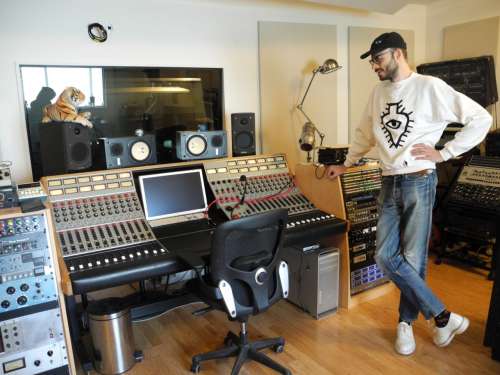 Joakim standing over a soundboard in his studio, Crowd Spacer, in Brooklyn, NY

If you’ve never heard Joakim DJ before, you’re bound to be exposed to sounds and artists you probably have never come across (hopefully including some you like too!). Joakim is a classically trained musician who will take you on a long and exciting journey in his DJ sets. Mixing everything from field recordings, unreleased demos, and pretend-to-be-African-artists. What you are about to hear is “a very broad mix of African music,” dating anywhere between the 1960s to present-day, and sometimes not even originating from Africa, but inspired by African artists or music.

The set was originally intended as a kind of introduction and tribute to William Onyeabor, and recorded at MoMA PS1 during the NY Art Book Fair in the fall of 2013. At the time, we were about to release a compilation of music by William Onyeabor from Nigeria.

For the fair, we had made a fictional Nigerian newspaper that gathered many of the mysteries and stories that surrounded Mr. Onyeabor’s fantastical life. It had taken Luaka Bop about five years to prepare the compilation, but throughout that time we struggled to learn anything about William Onyeabor himself, as he constantly refused to answer questions about his past.

Although we still don’t know much more about him today, Joakim was one of the very people that we had met along the way and who would have some kind of answer to the questions. We ended up working closely with him throughout our William Onyeabor project in many ways. We also found our next Luaka Bop artist through one of his many beautiful mixes, and pretty much asked him to play any time we throw a party or event. In short, we thought it made a lot of sense to have Joakim do our first show, here.

We hope you like the music and that you come back for our next show in June!