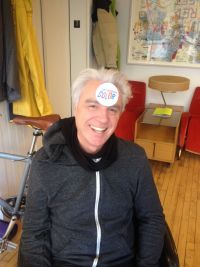 I stumbled upon the world of colorguard by accident. I had no idea it existed. Sure, I knew about halftime shows at football games with drumlines and marching bands and teams waving flags and tossing rifles, but this spinoff, technically referred to as Winterguard, was all but unknown to me—as I suspect it was to many of the folks here who aren’t involved in “The Sport of the Arts”.

I got a request in 2008 to use some music I’d written and recorded for a Robert Wilson collaboration I did in 1988 called The Forest. It’s orchestral music, largely instrumental and not that well known, so when what sounded like a dance troupe made up of high school- and college-aged kids wanted to use it I said, “Yes, no charge.” All I asked in return was a video of the performance, out of curiosity..

Months passed, I forgot all about it, and then I received a DVD of the World Championship competition—scores of teams at the peak of their form. I sat down, popped in the DVD and was gob smacked (as the English say)—it wasn’t halftime routines, but something else entirely. Some hitherto unknown (by me, at least) art, performance and gymnastic form that seems to exist widely across the continent and which was obviously hugely popular. The competition was held in a packed arena—this stuff has fans! Lots of them!

I saw it as a vernacular art and performance form that had evolved outside the influence and pressure of the media gatekeepers in big cities. That by itself was refreshing to me—we get a bit smug and insulated and self important in our little bubbles. This was an art and performance form of the people—the programs they create showcase their concerns, their joys and enthusiasms. Some of those concerns are, I saw, surprisingly dark and serious; folks out there have a lot on their minds and here is, it seems, a way to express those concerns. At other times it is a way to celebrate beauty, humor, skills, love and the healing our collective wounds. It deserves to be more widely known, I thought to myself.

As I watched, I saw that all the teams were working to pre-recorded music—mostly montages or edits created by their designers and directors. The music use was sometimes familiar and sometimes inventive, but to be honest it wasn’t going to set the antennae of my NY friends aquiver. But, I thought to myself, LIVE music by cool contemporary acts would do that! What a tempting concept!

I let the idea lay for a while, but it wouldn’t go away. I did a test edit on video—using footage from the DVD, I replaced the 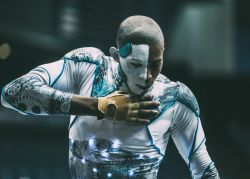 sound from the competition with some music from my personal playlists and it worked! It appeared, in most cases, to sync up incredibly well. It matched so well that when I used the video to shop the concept, I had to reiterate over and over “This is NOT the music from these performances!” Even so, many of those who saw the video didn’t believe me. The sonic and visual evidence was in front of them—should they believe my boring insistent entreaties or the fun sounds and footage in front of them?

Eventually we found in BAM and Luminato Festival, two willing partners up for taking the plunge on this idea. A simple idea, but one that would require 3+ years to execute and put into place (thank you for your perseverance, LeeAnn).

I won’t go into the boring day-to-day details of how this evolved, but a few points bear articulating... We approached the color guard governing body, Winterguard International, early on—as we knew we’d need their blessing. I mean, can you imagine Mr. Psycho Killer approaching a high school about working with their kids? WGI also helped us determine which season would be most available for the teams—in between competition season and drumline camp and the ramp up to football season in the fall. Then, armed with that information, we went back to BAM, Barclays and Luminato to see if those slots would work for them. The arenas get booked early on—for concerts, yes, but most of all for sports, as that’s their bread and butter. So, after much discussion we managed to get a commitment to four dates in June. We were off and running! I could approach my dream team of musical artists and we could begin to dig into researching regional guard teams (regional to avoid having to fly hundreds of kids across the country).

Not every artist approached said yes, in case you think this hall happened instantly, but the right ones did—and those even took up the challenge of writing new material based on the programs their teams had devised and created for their 2015 championship season.

I sensed that this might be an interesting process—a meeting (or collision) of worlds worth documenting, so we approached the Ross Brothers, via Josh Penn, one of the producers of Beasts of the Southern Wild that I met at the Smithsonian—that’s the way these things work. I’d seen their films Tchoupitoulas and 45635, and sensed that they too had an appreciation and love for the mores, lives and creativity out there in the flyover states. Their new film, Western, was well-received at Sundance 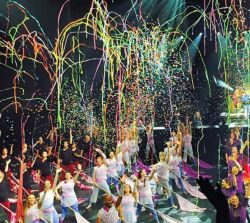 and won a prize at SXSW, so their work is gaining notice and respect. They’d get this, I thought—and I was right. They’ve accompanied us to competitions and have been there when the artists met their teams. There have been plenty of laughs and tears, so I expect the doc, probably due in ‘16, will be pretty special. We have harvested select shots to make interstitial shorts that play on the Jumbotron between each program during this live show; hopefully they have answered some more of your puzzled looks regarding these worlds and the folks who live in them. Keep a look out for the complete feature length doc next year.

As things progressed we brought in a production team for the event, folks who had done music shows, and sports events, as well as circuses and other shows maybe a little closer to this. And what exactly is this? Is it an art piece? Performance art? A spectacle? A pop culture mashup? Worlds in collision?

Well, all of the above, really—though if you need a genre or slot to put this in, I’m afraid I can’t help you. I’m writing this before it happens, obviously, so my fingers are still crossed, but from what I’ve seen at team rehearsals and heard of the music as it rolls in, we’re in for something unlike anything else.