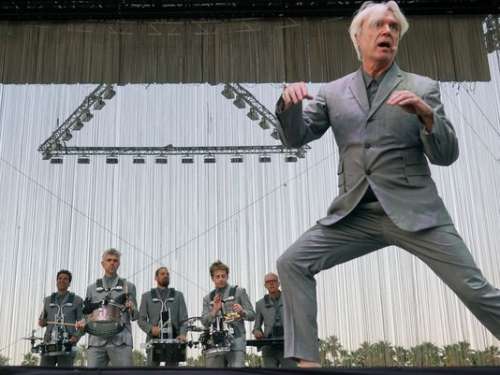 The dust on the six days of Coachella has settled. And most of it has settled in our lungs and shoes.

The Coachella coverage squad of the Desert Sun, a part of the USA TODAY NETWORK, has been watching bands, taking in the art, eating the food and rubbing sweaty sun-burnt elbows with the crowds, and it's time to look back at this year's festival.

It will be remembered as Beychella, but being a guy who likes to take the path less traveled, I tried to get everyone to call it Coach-oncé. No sale.

Anyway, here are our favorite moments and memories from Coachella 2018.

Byrne was great both weekends, but it was the Weekend 2 performance that saw him play "Once In a Lifetime" right at the same moment as one of those all-time classic Coachella Valley sunsets over the San Jacinto Mountains. Once-in-a-lifetime indeed. — Shad Powers

Two moments come to mind for me. My first slice of spicy pie (of the year) on Friday and when alt-J played their smash hit Breezeblocks, which was the first of their songs I ever heard and ignited my love for the British indie trio. — Corrine Kennedy

Experiencing Jean-Michel Jarre's pulsating electronic music as beams of lights projected out over the audience, encapsulating us like being in an LED light house, was my first amazing moment of the festival. The translucent planes created a ceiling over the audience, but you could see palm trees swaying in the background, punctuating the statements the French electronic pioneer was making about the environment. — Bruce Fessier

4. Slim Shady's still got it

Standing next to this macho dude in his late 30s who was reciting every line of Eminem’s wordy rap song, Stan, with unbridled enthusiasm made me appreciate Eminem even more than I thought I would. I like a lot of Eminem’s later material, where he revealed himself as a good dad who learned from rehab. So, I wasn’t terribly excited about going down memory lane. But seeing this guy rap along with such brio impressed me. I mean, I can’t remember all the words to Jingle Bells. — Bruce Fessier 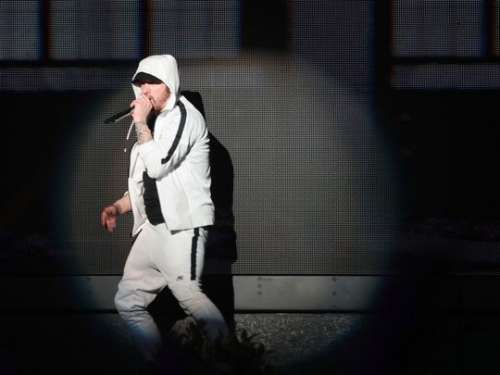 Is Greta Van Fleet the second coming of Led Zeppelin? It certainly sounded like it. But with fresh enthusiasm. We’ve been debating whether that makes them derivative but regardless, their sound and energy is infectious, and I haven’t been this excited about a classic rock band since The Black Crowes hit the scene. – Kate Franco

Even though the plethora of parties held during Weekend 1 of Coachella aren’t sanctioned by the festival, they very much are a part of the culture. One of my favorite festival moments was attending the #RevolveFestival at the Merv Griffin Estate in La Quinta. After a 30-minute shuttle ride from the Indio Fashion Mall to the luxury estate, I was greeted with a carnival swing ride borrowed from Michael Jackson’s Neverland Ranch and the best people watching ever. The live music and tasty cocktails also helped. The only regret was not being there Sunday when Snoop Dogg and Chance the Rapper performed. — Xochitl Pena

With The Weeknd and Jamiroquai playing simultaneously I chose Jamiroquai the first weekend and it was great. Fun dance party all the way through and ending with Canned Heat (Napoleon Dynamite song) for a tent-wide dance-along. Armed with that knowledge, on Weekend 2 I watched the first 85 percent of The Weeknd which was really good. A firework-burst moment matching a beat-drop during I Can't Feel My Face gave me chills. Then I snuck back over to the Mojave Tent to watch the last few minutes of Jamiroquai and I was treated to not just Canned Heat but Virtual Insanity which they did not play Weekend 1. Perfect execution if I do say so myself. — Shad Powers

"Can you keep up?" That's the opening lyric to Destiny's Child's Lose my Breath. And I could barely keep up during Beyoncé performances — both Weekend 1 and 2. I'm a huge fan of the queen, a Beyhive member if you will. But this was the first time I saw Bey perform in person (I know, shame on me). This was the show I've always wanted to see: a Destiny's Child reunion, a different rendition of her break-up anthem Sorry and plenty of throwbacks to dance to. Some of the most important distinctions about the performances were her beautiful homage to black culture and a shout-out to all the "independent women" in the audience. —  Briyoncé aka Brian De Los Santos

9. Portugal. The Man and The Beatles

It was one of the last moments of this year's Coachella, but it was one of the best. At the end of Portugal. The Man's rad set on Sunday afternoon at Weekend 2, for seemingly no reason, they broke into the song Hey, Jude. As you can imagine the whole field was singing together "Naaaa, Na, Na, Na-Na-Na Na!" I hadn't felt goosebumps like that since Paul McCartney himself did the same thing in 2009. — Xochitl Pena