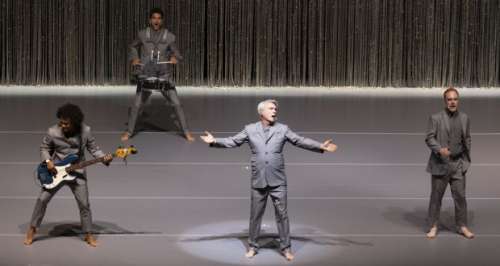 We’re in the age of the rock star farewell tour, as the fading idols get the last of the lucrative tour bucks in before they get too old to remember the words to their hits. So it’s heartening to hear that, at 66, David Byrne is hitting another creative high with his first solo album in 14 years, American Utopia, and hitting a performance peak with his world tour, which he has called “the most ambitious show I’ve done since the shows that were filmed for Stop Making Sense”.

That’s certainly raising audience expectations, and Byrne doesn’t disappoint, rethinking the whole structure of a rock show and recasting it as a life-affirming celebration of sound and movement.

Byrne and his 12-strong band are a movable feast, marching freely around the 3Arena stage, unfettered by guitar leads, drum risers or keyboard stands, and backed only by a shimmering silver curtain. Although everybody is dressed in grey suits, they’re barefoot – the effect is as though an accountancy firm had suddenly decided to abandon their desks, throw off their shoes and throw a portable party. It doesn’t take long before the infectious, upbeat mood spills over into the audience.

The setlist centres on the new album, which is quite the mixed bag, Byrne mashing up gentle melodies with crunching electronica, latin beats and a dollop of edgy 21st century disco, with lyrics that blend ironic observations with surreal, subconscious imagery and plenty of “Byrne-splaining” as he tells us what’s really going on with human and social behaviour.

The show starts with Byrne alone at a table and chair, holding up a medical model of a human brain, like a cerebral Hamlet delivering a lesson in human psychology.

Then the band flits in from behind the curtain, and they’re straight into Lazy, his hit dance collaboration with X-Press 2. As the musicians move in unison around the stage for I Zimbra and Slippery People, they come across like a futuristic tribe – but this one is anything but insular.

The show is about inclusivity, welcoming the world and embracing its wonders, and nothing encapsulates the vibe better than the new album’s standout song, Everybody’s Coming to My House. Byrne quickly follows it with This Must Be the Place (Naive Melody), just to gently hammer the point home.

Once In a Lifetime, Born Under Punches (The Heat Goes On) and Blind keep the momentum up, but Bullet stops the audience in its tracks with its visceral imagery.

Byrne and band end with a raucous Burning Down the House, then encore with Road to Nowhere and The Great Curve, before throwing a final curveball at the end with a Janelle Monae protest song, Hell You Talmbout, which namechecks unarmed black men shot dead by US law enforcement.

If anyone can set you free from the hateful, dishonest and small-minded narrative that currently holds sway in America, Byrne is one man who definitely can.