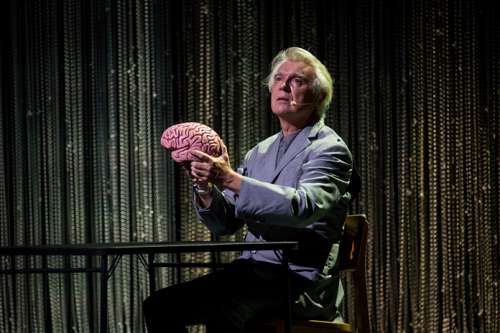 There is nothing on stage at the Shrine Auditorium that indicates a rock show will be taking place-not even an art rock show. The entirely bare stage is lined on three sides by silvery grey beaded curtains. These shimmer like raindrops, receding into the background when necessary and becoming part of the performance the rest of the time.

This is the setting upon which David Byrne is staging the live show for his latest solo album, American Utopia. The one-time frontman for the pioneering avant-garde group, Talking Heads, is no stranger to unconventional presentation. The barefoot Byrne is dressed in a grey-tone suit that matches his curtains. His jacket features three layered pockets on each side that give the impression of fish gills. Byrne's extensive, multi-generational, multi-cultural band are also similarly attired in grey suits with bare feet, their instruments strapped to their bodies marching band style.

There are no speakers, monitors, or amps of any kind visible, yet the sounds emanating from the stage are enormous, as is the impact of the performance, which has a lot more in common with musical theatre than a rock 'n' roll gig. Dance is as much a part of the performance as Byrne's signature talking-style delivery of vocals and the skilled playing of the instruments. Choreographer Annie-B Parson (who worked with Byrne for his concert collaborations with St. Vincent) is to be credited for the emotive, synchronized dance moves, which are a challenge if you have all your limbs free, let alone when you're stomping around the stage flawlessly playing an instrument.

Byrne threw himself into the performance, employing a headset microphone in order to keep his arms available for dancing. There was something of a video shoot feeling to the whole set, exaggerated and dramatic like so much of Byrne's work has always been. Strobe lights provide the only effects, mainly white with the occasional dip into red or blue, perhaps a sly commentary on patriotism? At one point, the lights created a massive shadow of Byrne against the back curtains, taking the illusion of larger than life to the next level.

Byrne's clever and irreverent banter is legendary but that was (almost disappointingly) kept to a minimum with his only commentary being political in nature, particularly in the case of voting. This went hand-in-hand with his partnership with HeadCount, "a non-partisan organization which works with musicians to promote participation in democracy," according to HeadCount's site.

The packed house was filled with diehard fans who, understandably, were more vocal and participatory during the Talking Heads songs. Included in these were perennial favorites, "Once in a Lifetime," "Burning Down the House," and "Slippery People." The shouts of the crowd bellowing "same as it ever was" during "Once in a Lifetime" were truly deafening. There was a bit of up and down as fans took their seats for some of the songs from American Utopia such as the excellent "Doing the Right Thing."

There was not one, but two encores, demanded so by the foot-stomping and tidal wave of applause and the continuous roar of the crowd. Byrne and company did not disappoint as the tremendous guitar crescendo at the end of the first encore, courtesy of his stellar guitarist, Angie Swan, whipped everyone into a true frenzy. The second encore included a cover of Janelle Monáe's "Hell You Talmbout," which didn't help in closing out the night, but rather revved the audience up for more. The only thing missing was the inclusion of super-fun Talking Heads song, "Psycho Killer," but that is forgiven in light of the truly fantastic, wholly original theatrical presentation.