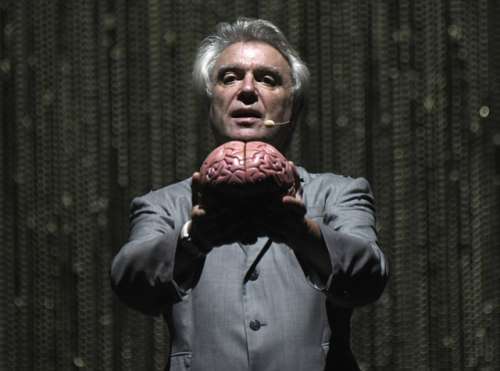 The David Byrne show at the Santa Barbara Bowl began last Friday evening with him sitting alone on an empty gray stage, holding a pink toy brain. This is gonna be good, I thought. I was right. As the former Talking Heads’ frontman began singing “Here” from 2018’s America Utopia — his 11th solo record but the first in 14 years — he slowly rose from his seat as his band emerged from behind a shimmering curtain of thin metal chains. They and Byrne — all barefoot and wearing suits the same shade gray as the stage — tramped, lurched, and danced about, the guitars, keyboards, and drum kits strapped to them swaying with the rhythm of their bodies.

The 12-piece band stayed in near constant motion the entire set, a percussive, kinetic force resembling a college marching band and a colorless color guard, with Byrne’s shock of white hair and his muscly voice the center of attention. The 66-year-old singer and guitarist occasionally rolled up his pant legs and sleeves and swayed, in his classic dance style, like a marionette pulled along by an invisible hand. Leaning heavily on material from America Utopia, like the somber “Dog’s Mind” and the upbeat “Every Day Is a Miracle,” Byrne also belted out the Talking Heads hits “This Must Be the Place (Naive Melody),” “Once in a Lifetime,” and “Burning Down the House.”

As a powerful closer, Byrne reminded the audience to vote in the upcoming election; then he covered Janelle Monáe’s 2015 anthem “Hell You Talmbout,” a call-and-response song that lists the names of young black men and women killed by American law enforcement and vigilantes. The list was updated to include Nia Wilson’s recent death in Oakland, and the night ended with the undertones of political awareness, uncomfortable truths, and prevailing optimism that infuse so much of Byrne’s music.