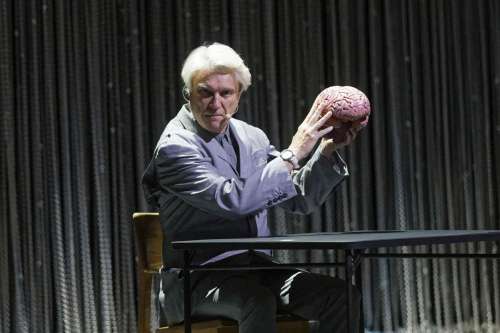 Truer words have seldom been spoken from a concert stage.

Everything about Byrne's hour-and-45-minute performance was right, and right on. Adding to a legacy of groundbreaking shows that he began with Talking Heads' Stop Making Sense spectacle in 1983, it was as much contemporary ballet as concert, featuring Byrne and his 11-piece ensemble, including six percussionists, in an intricately choreographed romp around a bare stage. There were no stationary instruments and just a corded, three-sided curtain for backdrop the gray-suited, barefooted troupe moved fluidly through each of the 21 songs, executing each with tight precision and houseparty exuberance.

It was arty and artful, but completely accessible. The musicians were visibly having as much fun as the crowd, and even when Byrne and company weren't on stage -- yielding momentarily to a youth choir from the Detroit School of the Arts for an a capella reprise of "Everybody's Coming To My House" -- it was a winning moment.

The carefully crafted staging made sure each of the numbers was an individual highlight, from the white-haired Byrne seated at a table singing to a replica of a human brain to open to the show with "Here" to his staggering rendition of Talking Heads' "Once In A Lifetime." Neatly positioned floodlights created massive shadows during Talking Heads' "Blind," while "I Dance Like This" was accented with pantomime and strobe lighting.

The music -- Byrne's usual blend of pop, rock, R&B and World Music styles -- was as exceptional as the visuals. Though the focus was not surprisingly on his latest album, "American Utopia" -- including the topical "Dog's Mind" -- while his Talking Heads heritage received ample airing via furious renditions of "I, Zimbra, "Slippery People," "Burning Down The House" and "The Great Curve," as well as a moving version of "This Must Be The Place (Naive Melody)." The curve balls came via his St. Vincent collaboration "I Should Watch TV" and a treatment of his Brighton Port Authority track "Toe Jam," while he closed the night with Janelle Monae's charged "Hell You Talmbout," updating it with the names of additional victims of police violence.

Byrne does not tour often, but when he does he always makes it worthwhile. American Utopia was no exception, and we'll be hard-pressed to see anything better on a concert stage this year -- and, some might convincingly argue, ever.