On a cold, autumn Tuesday night, a star shone brightly on the Brighton Centre stage, Talking Heads legend David Byrne was in town and boy, did he put on a show! It’s testament to the charismatic Byrne’s musical evolution, longevity and unique quirky creativity that he can still sell-out sizeable arenas like this one and the O2 where he had played the previous night. 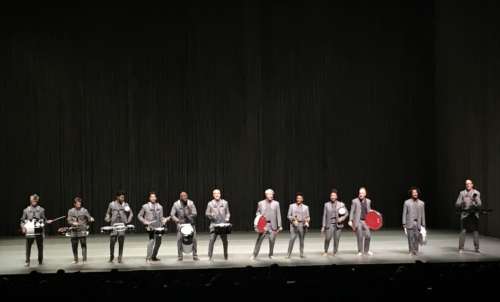 I’d heard lots of great things about the ‘American Utopia’ world tour which supported the release of his 2018 album of the same name and I wasn’t to be disappointed. Brighton was the 130th stop on the tour and the performance this evening was as fresh as if it were the first. Not bad for a 66 year-old whose stamina and energy would put those half his age to shame.

This was so much more than a regular concert, it was an immersive stage show of music, theatre and dance performed against a minimalist stripped-back set of chain curtains. It featured beautifully choreographed routines and clever lighting which all made for an extremely slick production. Byrne and a cast of 11 highly talented supporting musicians dressed in stylish light grey suits played all manner of instruments as they glided through the set with considerable aplomb – not a beat was missed, not a step out of place.

The show opened with a seated shoeless David Byrne on stage holding a model brain, he then leapt up and addressed the crowd, brain-in-hand whilst he performed the opening narrative ‘Here’.

The brilliant band then appeared through the chains and join him on stage for a pulsating version of his hit collaboration with house duo X-Press2 ‘Lazy’ which reached number 2 on the UK charts in 2002.

Throughout the evening, the band would play a number of instruments from guitars and keyboards to bongos, congas and tamborim shakers which gave some of the tracks a wonderful world-music feel and samba beat. Every single note of the set was played live as Byrne himself pointed out.

Music wise, there were too many highlights to mention. The Talking Heads numbers were extremely well received none more so than the superb performance of ‘Burning Down The House’ a 1983 release later to be covered and catapulted into the charts by The Cardigans and Tom Jones. A huge cheer went up for the magnificent ‘Once In A Lifetime’ which Byrne introduces by staggering around in a lone spotlight before the band join him. There was a rousing version of ‘I Zimbra’ and a visually stunning ‘Blind’where Byrne and his band turn themselves into living shadow puppets with the use of clever lighting and choreography.

The final encore of the night was reserved for an accomplished percussion version of ‘Hell You Talmbout’ (a contradiction of talking about), an anti-racist protest song written by Janelle Monáe and released in 2015.

Without doubt, this was an uplifting ‘feel-good’ show which was made for a big stage, so good in fact, NME stated “this may just be the greatest live show of all time” – the Brighton audience probably wouldn’t disagree. They departed with springs in their step and a smiles on their faces that will last for a very long time indeed. 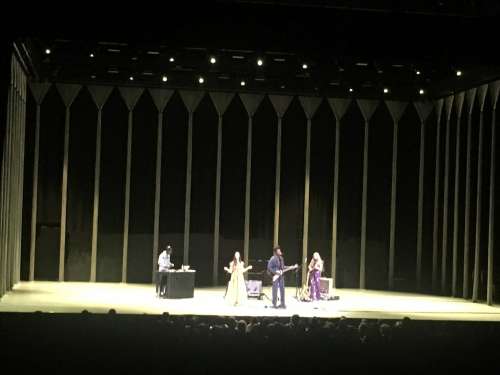 Support tonight came from ‘The Clementines’ featuring the highly talented Benjamin Clementine who won the 2015 Mercury Prize with his album ‘At Least For Now’. Clementine has a very powerful unique voice and expresses himself through his use of musical poetry. Performing this evening as a four-piece, they opened with a pleasant set which is hard to compartmentalise as it was quite unique. Soulful, folky and delivered with beautiful harmonies. Their warm interaction with the crowd was certainly appreciated and the set went down extremely well.