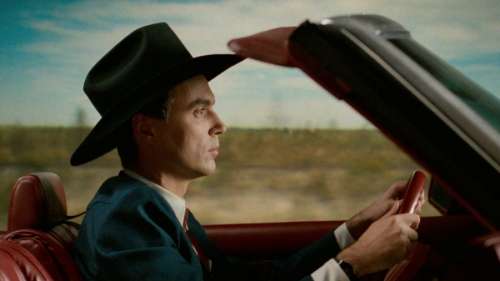 It took an outsider to make the definitive North Texas movie.

Filmed in seven North Texas counties in the fall of 1985, David Byrne’s celebration of Texan specialness, True Stories, has been a strangely overlooked film that proved eerily prescient about the region’s development from rural prairie to forward-looking technology hub.

The scripted film was filled with fictional characters. But what’s interesting about looking back at it today is considering it as a quasi-documentary of North Texas in the '80s.

There’s no better time to revisit the film, with a new reissue on Blu-ray from the fetish-worthy Criterion Collection containing several new featurettes revisiting the film’s creative team and its prairie-meets-city locations. 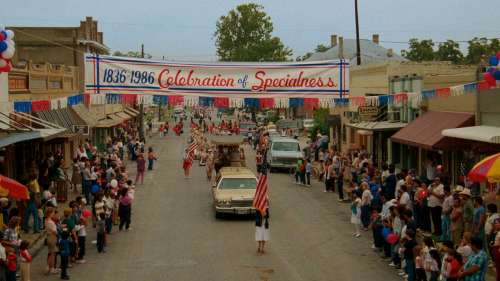 True Stories is a film without a central conflict or a linear plot. It’s an unusual hybrid — equal parts musical, satire and anthropological examination, centered around the inhabitants of a fictional North Texas town named Virgil.

Many of the characters — including a boyish would-be lothario looking for a wife (John Goodman), a honey-voiced serial liar who claims to have written “Billie Jean” (Jo Harvey Allen), a mildly psychic conjunto singer (Tito Larriva), and a messianic technology proselytizer (Matthew Posey) — work at Virgil’s largest employer, a semiconductor plant belonging to fictional Varicorp Corporation.

Over the course of a week, these characters and others meet in varied combinations in bars, malls, parking lots and outdoors before the barren horizon. Six songs Byrne composed for his characters appear in the film. Unlike in a traditional Hollywood musical, True Stories characters that break into song usually have a stage to perform on and a narrative reason to sing.

The film's approach may have yielded a hostile or condescending outsider’s take on its characters, but the dreamlike tone is gentle, curious and embracing. Like Fellini, Byrne loves his characters too much to reduce them to flat jokes. 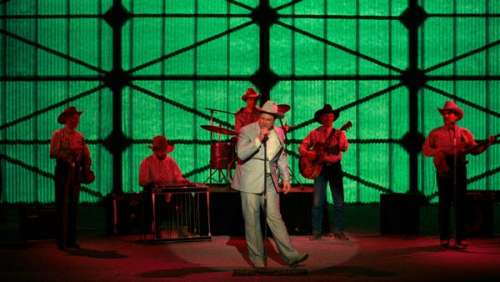 Aside from a handful of interiors filmed in a studio, everything in True Stories was shot around North Texas. And although Byrne was based in New York and a handful of the production team and its topline actors lived elsewhere, the film is populated with Texans who gravitated to the set to act, appear as extras, fill out the musical score, or just observe the surreal spectacle.

Many participants remain locals today, and remember the film as an experience that galvanized an artistic scene, bringing together traditional Texas performers (line dancers, marching bands, yodelers) and members of the region’s subversive underground, who populated many of the film’s smaller roles and helped out on the production.

While many film sets feel so ordinary and “professional” that they remove all magic from the process, the True Stories shoot was by all accounts a blast, filled with creative minds and first-timers excited to contribute to a movie that actually concerned contemporary life in their region.

When Byrne first considered filming in North Texas and using its talent, music was a big draw. “There’s lots of different kinds of indigenous music that was tapped for the film,” he told The News’ Russell Smith in 1985 during a break from shooting. Stylized versions of gospel, R&B, Tejano, polka and country are heard throughout the film, as are custom-scored orchestral and Muzak fragments. The sense of openness in the population also appealed to Byrne.

“I guess a lot of people here seem to be kind of proud of what they are. They are what they are, and that’s OK — they’re not gonna try and hide it. What’s nice is, they’re more tolerant of other people’s individuality.”

The predominant tone of the film is reverence for eccentricity rather than mockery of it.

Over the course of six albums as lead singer, lyricist and rhythm guitarist for Talking Heads, Byrne had developed a persona encompassing both innocent wonder and detached alienation, simultaneously observer and victim of the modern world’s complex machinery.

His nerdy charisma is front and center in the Jonathan Demme-directed Stop Making Sense (1984), still the greatest concert film ever made and a project that helped him secure a deal with Warner Bros. to make his debut as a feature director with True Stories. (It would be his only film, although he has continued to work extensively in theater and in collaboration with visual and digital artists.)

He would also play the film’s fresh-faced narrator, speaking in a flat monotone and dressed head-to-toe in designer cowboy duds. It’s one of the film’s wonderful charms that this clear interloper with his alien rhythms is the only character dressed in Western wear.

The film’s writing began in Los Angeles in 1984, with the help of Oak Cliff-raised Stephen Tobolowsky, then at the start of a long and successful acting career that would later include such seminal roles as irritating schnook Ned Ryerson in Groundhog Day and devious tech CEO Jack Barker on HBO’s Silicon Valley.

Demme had invited Tobolowsky and his then-girlfriend Beth Henley, both Southern Methodist University grads, to comment upon a rough cut of Stop Making Sense, and their mutual enthusiasm for it (despite never having heard of Talking Heads before) and their obvious gifts as storytellers intrigued Byrne. They were offered an unusual assignment: to construct a screenplay based upon a series of Byrne's storyboard-like pencil sketches. The rough, wordless pictures seemed to imply small-town eccentrics framed against distant flat horizons, but no obvious story line linked the individual panels. Henley, by far the more famous writer of the pair (having won a Pulitzer Prize for Drama for her 1981 play Crimes of the Heart), concentrated on character while Tobolowsky was left to figure out a narrative.

Sensing Byrne’s attraction to garish tabloids like the Weekly World News, Tobolowsky settled upon a loose Altmanesque framework about a handful of eccentrics on the eve of Texas' 1986 sesquicentennial.

Reached by phone in Los Angeles, Tobolowsky remains characteristically modest about his role. “I knew the star of the show would be these songs he had written. So what I needed to provide was an excuse to gather these characters together — parades, contests, different celebrations.”

Tobolowsky quickly completed a treatment and then, together with Henley, a script, which was later completely reshaped by Byrne to an even freer structure in which his on-camera narrator acts as interlocutor to the region’s folkways.

In the final film, there was little of their work left to recognize, even though all three share screenwriting credit. “There were a few remnants of our lines in there,” Tobolowsky says with a gentle laugh, recalling his first viewing. “‘Hey, there’s one of Beth’s! There’s one of mine!’” He says this without bitterness; he’s a fan of what he sees as “the magical quality of life” in the film’s tone. But what struck him most about the final product, he notes, “is how true it was to the drawings.” The visual ideas came first and stuck longest.

During the scripting, Byrne made several visits to North Texas, accompanying Tobolowsky and Henley to the Longhorn Ballroom, Highland Park Cafeteria and Big Town Mall in Mesquite, the latter of which would appear in the film. He also responded to new structures in town. “David was fascinated with those phony reflective gold buildings [the mirrored Campbell Centre office towers] near NorthPark,” Tobolowsky remembers, noting that the director imagined a film “with those Logan’s Run buildings and cattle grazing in front of them. He found humor in the juxtaposition.” Although that image appears nowhere in True Stories, the film would otherwise very much support that vision, with the camera panning laterally through new subdivisions giving way to empty, garbage-strewn empty lots, all before an unblinking, eternally blue sky.

These foraging trips generated more ideas for the film, as he scouted local artists and musicians. The landscape impressed him too, as he told The News’ Dusty Rhodes just before the film’s release in 1986. “It was flat. I thought it made the characters and the buildings and everything else kind of stand up in relief.”

Throughout the film, Byrne and cinematographer Ed Lachman offer a distinctive visual style defined by the deadpan frontality of its compositions and the artificial cheer of its color, lessons that would be eagerly absorbed by Texas director Wes Anderson a decade later. “It was almost as if there was no framing, [or] the framing that a child would do,” offers Byrne on the new documentary accompanying the Criterion release. “Let’s avoid any arty considerations and just put everything right in the middle. It ends up being very arty in its own way because it stands out as being kind of unusual in films or photography, so it ends up having a point of view even when you’re kind of saying ‘I want to avoid having a point of view.’” 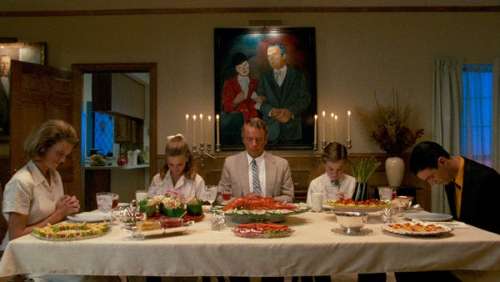 The film premiered at the New York Film Festival almost exactly a year later, on Oct. 4, 1986. Reviews were strong in the major papers, with Sheila Benson in the Los Angeles Times calling it “joyous, daft and hauntingly original.” Dallas Morning News critic Smith read it mainly as a comedy, but one that “registers more as a neutral expression of fascination and curiosity toward people for whom reality is constituted in the particulars of everyday life, people who live their lives much closer to the ground and the shopping malls and the trailer homes, oblivious to the big sky that surrounds them.”

That didn’t translate into a huge success with the public. Roger Ebert felt compelled to note in his otherwise adulatory review that Warner Bros. “is going nuts trying to figure out how to sell this film.” Despite Byrne’s appearance on the cover of Time the week of the film’s release, the film’s take was considered disappointing after the breakout success of Stop Making Sense. Home video and cable, which have rescued so many little-screened 1980s films, allowed its cult to patiently develop and it's now one of Criterion’s most eagerly awaited new releases.

The film’s Southwestern premiere occurred at NorthPark on Oct. 30, 1986. Angus Wynne III chaired a benefit screening and Byrne agreed to appear provided that 600 (!) members of the True Stories cast and crew be invited. Byrne appeared on Late Night with David Letterman two nights before, wearing the brick suit modeled in the film’s fashion show, and as a gesture of friendship FedExed it to Denton so that Carl Finch of Brave Combo could wear it to the premiere.

That night was the last time the filmmakers and the locals involved in the production would all be together. The event netted over $13,000 for the USA Film Festival, whose director, Rich Peterson, told The News that Byrne “felt very strongly about the good time he had working with these [Dallas] people. The party made the movie come to life.”

In retrospect, True Stories’ juxtaposition (Tobolowsky’s word) of the striving of its earnest characters and the region’s rapidly evolving landscape of open land, spare suburban developments and techno-futurist office parks is its most prophetic feature.

Joined together with snatches of the region’s music, however demented they become in Byrne’s translations, the film becomes a valentine to, and made entirely possible by, the people of North Texas. 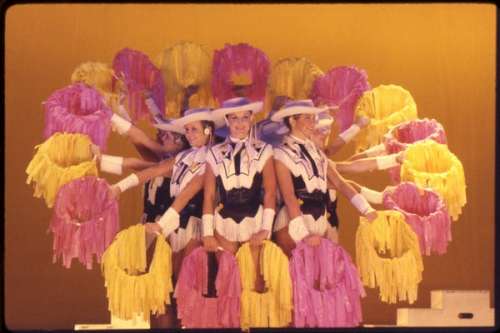 For True Stories’ climactic sesquicentennial-celebrating talent show, David Byrne and his producers placed an extraordinary ad in The Dallas Morning News and other local papers for an open audition on Aug. 25, 1985 at the Arcadia Theater on Lower Greenville Avenue (now site of a Trader Joe’s). “We are looking for unique and creative people with unusual and out of the ordinary acts. We need all-American entertainers for a pageant — NO PROFESSIONAL EXPERIENCE NECESSARY,” went the ad. “No jugglers, no mimes, no magicians, no rock bands.”

They did, however, get line dancers, baton-twirlers, and a man who lit his foot on fire. Click here to learn more about this fabled audition and read a detailed history of the local characters who contributed on- and off-camera to make True Stories an unlikely classic.