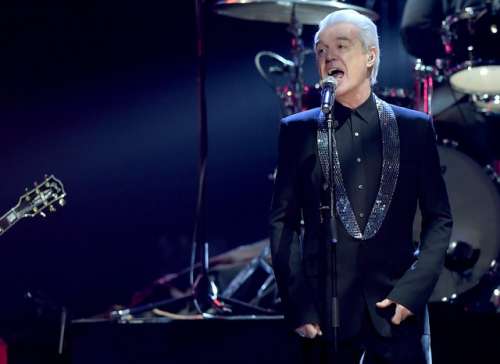 David Byrne and Oneohtrix Point Never make a natural pairing. There’s something of Byrne’s longtime creative partner Brian Eno in 0PN mastermind Daniel Lopatin, who has developed a rich synthetic sound world that is entirely his own, and has recently proven himself like Eno to be equally comfortable working solo or with a diverse list of collaborators. The pair also share a willingness to wring raw emotion from settings that are deliberately stilted and unreal—think about R Plus Seven’s gorgeous soundscapes made from cheap digital instruments, or how the movements of the stage crew become a part of the choreography in Stop Making Sense.

Byrne recently premiered “This Is That,” a collaboration with Lopatin from Byrne’s upcoming solo album American Utopia. (The album also features collaborations with Eno himself and Lopatin kindred spirit Jam City.) You can hear the song at BBC Radio 6, at about 1:51:45 into this link. It’s slow and plaintive, filled with Byrneian juxtapositions between quotidian details drawn from modern and a greater spiritual yearning. “That’s when the river overflows / That’s when I use my cash card,” he sings, recalling the “water flowing underground…after the money’s gone” lines from the chorus of “Once in a Lifetime.”

Lopatin contributes a baroque electronic instrumental, with enough sonic and compositional to sustain listener interest on its own, even if no one were singing. For one moment, Byrne burrows deep into the cracks of the music, his voice disguised by heavy processing. (It’s also possible that this is some synthesized approximation of singing; it’s always hard to tell with 0PN.) But for the rest of the song, the voice and the music are distinctly, disappointingly separate, as if Lopatin crafted a track and then handed it to Byrne to sing over, with minimal influence on the production thereafter. “This Is That” is the sum of its parts, sounding essentially like you’d expect a Byrne-Lopatin joint effort to sound, but lacking the feeling of a truly holistic union between two artists who have the capacity to make something great together. For now, we’ll just have to hope they collaborate again down the road.