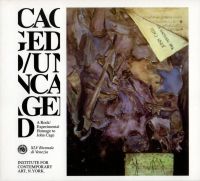 Several of Byrne's conceptual musical pieces relate directly to Cage's work and example. In 1993, he contributed a track to Caged/Uncaged - A Rock/Experimental Homage to John Cage, compiled by the Institute for Contemporary Art in New York for the 45th Venice Biennale. The track was recorded in John Cale's home studio; Byrne used two of Cage's Indeterminacy​ stories and intertwined them with a story of his own, so that it is hard to tell where one story ends and another begins. The stories are presented against a chaotic background of sampled sounds underpinned by a steady rhythmic beat. The organizers behind the album hoped that it would enable the philosophy of John Cage to reach a wider audience.

-From Sytze Steenstra's 2010 book, Song and Circumstance: The Work of David Byrne from Talking Heads to the Present