It seems to me that the resurgent issue of net neutrality—whether all net traffic has an equal opportunity to go at the same speed—is very much related to bandwidth, with Netflix using 32.25% of the total web bandwidth of North American home users nightly, followed by BitTorrent, YouTube streaming, pirate sites and porn. (I suspect these latter two have been intentionally left off the graph, as it would be embarrassing to the digital utopians and would also reveal that the service providers are making tons of money from sex and illegal content.) With more streaming services that provide movies or music as content emerging every day, one can see that the pipeline is being hogged by certain businesses, while others deal with what space is left. With a neutral net, everyone has an equal right to that same pipeline—or so we believe (only the cable and communications companies know for sure)—so if lots of folks all stream Netflix or other services’ movies tonight, the music file upload of a current song I wrote that I’m trying to get to another musician will go slower and slower—in fact everything slows down equally. No one gets to zoom along in the bus or the HOV lane. 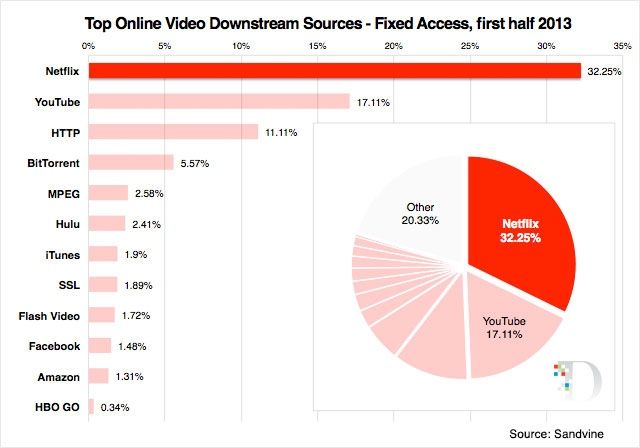 Net Neutrality means that as more folks use “what’s left,” Netflix movies (or Amazon or any other streaming service) begin to buffer, jitter and eventually deliver pixilated images to compensate. The pipeline isn’t infinite: in the U.S., it’s not even as large as it is in other countries, so various schemes have been put forward to deal with the congestion and alleviate those problems.

One proposal the FCC is considering—no matter how you look at it—throws out net neutrality altogether. That proposal is to create a separate higher speed pipeline that companies like Netflix pay for (and pass those costs on to their customers no doubt). Netflix has already paid Comcast and Verizon to get in the high-speed lane. So net neutrality is already being bypassed, it seems to me.

But what if those costs were the consumers’ decision? What if there was a meter on your Internet connection: when your bandwidth exceeded a threshold, a warning popped up and you could decide whether or not to pay more for the massive amounts of data you were streaming or downloading.

This would not be a restriction of the Internet, but a realistic reflection of usage. Every Internet service—new, old or yet to come—would have an equal opportunity to offer their content or data. This would not stifle innovation or prevent small emerging companies from competing with Amazon, Apple and Netflix. There would be no discrimination, but it would be up to the consumer to decide if the surcharge to their Internet service was worth adding to the cost of that Netflix movie.

Imagine that data was water. (Someone correct me if this is a bad analogy.) We all feel that we should have an equal right to water. But the fact is that if I decide to turn my entire yard into a massive swimming pool and then water my tropical plants as well, I’m using way more of a shared resource than most folks. I’m effectively draining the reservoir that we all share. Going further, a farmer does not have a limitless tap with which to irrigate their fields. Water isn’t limitless. There’s enough, for now, so that folks who just use it for washing, toilet flushing and cleaning dishes might be OK, but should we be, in effect, subsidizing the guy in Arizona who decides to have a green lawn, or the owner of a golf course in the desert? Or a city in the desert for that matter. (Hello, Las Vegas?) In the same way, we’ve been subsidizing the web services that have become hugely successful companies from the bandwidth we all equally share.

This hypothetical idea doesn’t restrict these web services in any way—it just passes onto the consumer the real cost of hogging the pipe. Getting water for free all seems fine—like a human right even—until the stream from the hose turns into a trickle, then we glance at our neighbors swimming pool and think, “Huh? Is that why I can’t flush my toilet today?”