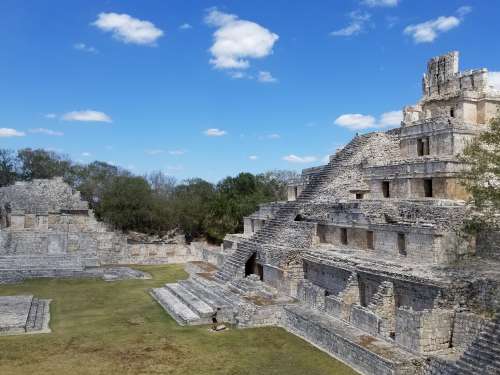 In early March, I biked out to the Gran Museo del Mundo Maya from the center of the Mexican city of Mérida. I stopped regularly to take pictures. 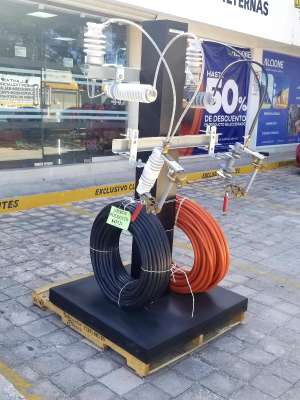 As I arrived, a large group of visitors had just emerged. This is a museum that emphasizes the culture and history of the Mayan people, rather than being a collection of precious objects from archeological digs. When it opened, there were complaints that it was a vanity project of the outgoing politician and that the state/city didn’t have enough STUFF to put in it. That said, there were plenty of sculptures of the myriad gods in all their otherworldly and often horrific aspects in the museum. Some of these were images of the gods themselves, and others were of priests or leaders who were masked and costumed, embodying the gods. In one, a ruler was depicted in ceremonial garb, covered from head to toe in long feathers sprouting in every direction. An otherworldly apparition.

Here is a mannequin of a young man who, according to the wall text, is about to face his own death. 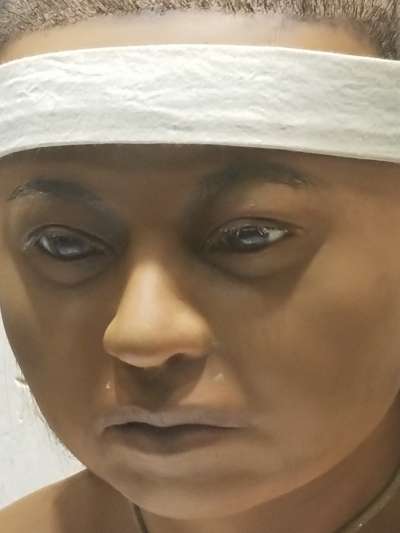 What struck me, after viewing one after another otherworldly apparition, was the terrifying and incomprehensible nature of these representations of the gods. Even the often benevolent deities—like the gods of maize, water and rain—seemed inaccessible, freakish and in some ways difficult to relate to. 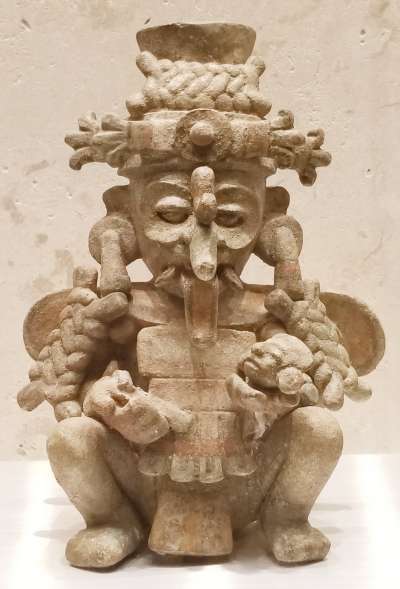 In some religions—such as Judaism and Islam—there is no representation of God or dieties—Yahweh or Allah are never pictured. There are words and sacred geometries in temples and mosques that echo the wonder of the creators’ creations but no direct representation. But so many other religions—including Christianity, Hinduism and Buddhism, as well as those in classical Greece and Rome—have portrayed their deities or avatars in recognizably human forms. The gods are in some basic ways like us. In the world of the Maya, as in others, the gods are represented but are not like us… They embody forces beyond our ken. 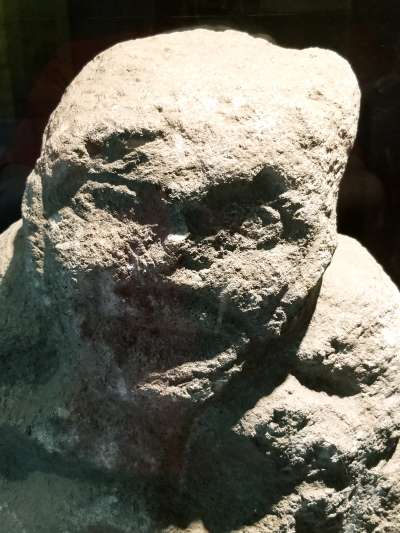 This is a very degraded sculpture of what appears to be a very angry God found in Cuicuilco, a very early settlement near Mexico city. It is not Mayan. The Mayans did not have a copyright on embodied horrors of the universe.

As I moved through the museum I encountered more and more of these monsters. Why? Why such horror? I paused—the inundation of otherworldly beasts prompted a possible insight. I thought to myself, “Maybe the monstrous aspect of these manifestations exactly embodies and expresses the point—their inhuman bizarre appearance intentionally distances them from us, from anything we recognize or can comfortably relate to.” They do this, I imagined, to more accurately mirror the perceived nature of the universe—a universe that is heartless, illogical, incomprehensible and, yes, beautiful at the same time.

Life and death—in the context of a tropical and agricultural environment like Mexico—are both ever-present, interrelated and intertwined. As others have pointed out, life comes out of death. Everything dies, decays and is resurrected in new life… Without death, there would be no new life. One must worship death AND life. The beauty of life is part and parcel with the terror and horror of death. Existence is both, simultaneously. “That is the context of the Maya images I was seeing,” I said to myself.

The cycles of life and death—the rains, the plants, the animals and the celestial clockwork—are the “what,” but the Gods represent the “why.” And that “why” is beyond our mortal comprehension and understanding. Maybe to represent such incomprehension demands images that are not like us, that are alien—from a world that is beyond anything we can imagine.

(There is a good chance that when we do encounter alien life among the stars we will not recognize it as life.)

Here is an image that is common throughout the museum, of one being inside another, wearing the skin of another. 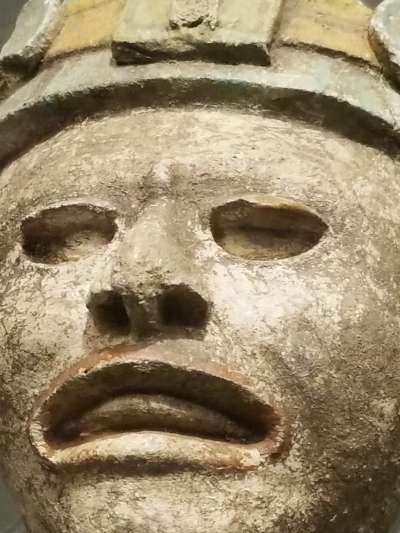 The gods’ terrible aspect represents mysteries we can never understand. Comprehension of the universe is beyond the capabilities of our feeble brains. We have not been endowed with a mental ability to make any kind of sense such things. We do not need to know. For us, reality is uncertain, ever-changing. In Maya and similar cultures, one can make offerings and sacrifices—Jesus was one such sacrifice—in some hope of influencing the cosmos. But the means of control, the agency, is never truly ours.

In a recent piece on computing and AI, historian George Dyson wrote,

The actions and the deep meaningful rituals the Maya gods demand are outside of human logic and reasoning. Books like The Golden Bough: A Study in Comparative Religion by James George Frazer describe blood offerings as contractual as if an action could mandate a counter-reaction from the cosmos—making rainfall or plants grow or animals offer themselves to us. However, sacrifices and ceremonies are not the mere transactions they are often portrayed as.

I think, rather, the dances, songs and sacrifices are more of an attempt to become a part of the mystery. To merge, engage and participate in and with the cosmos, to act in ways that are also similarly mysterious and illogical, to enact and mimic the irrational logic, to find a balance by being part of that incomprehensible process…to dance WITH the mysteries.

We can learn the ways of the world, we can see how things work, but the “why” is not available to us. We can participate but never understand completely. Yes, gods are something we invent to make sense of the world…They are representatives and embodiments of abstract forces in a universe without apparent rhyme or reason. Well, science does reveal the strange and often bizarre mechanics, little by little, but the WHY things and forces should be that way and not some other way is not information that is available to us. 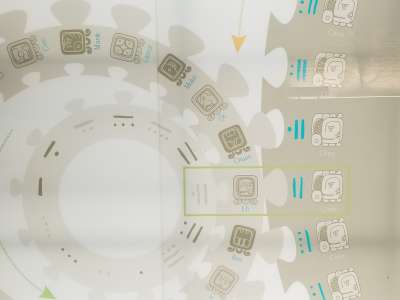 The Maya science imagined time as a series of interlocking gears. When one thinks of gravitational effects and their relationships to time and space, the Maya don’t seem so far off.

Our secular scientific world is no different—the more we find, the deeper we dig, the weirder it gets. The more we learn and discover the more incomprehensible the “why” remains. Quantum entanglement, dark matter, multiple realities… So much seems irrational or at least beyond human logic, and to mirror this, we ourselves, in our contemporary secular context, find and create images that are also just outside of our logical understanding.

We think of them as secular images and objects, or as an art, or dance, or theater, but maybe in a sense we deceive ourselves… We are not as modern as we think. 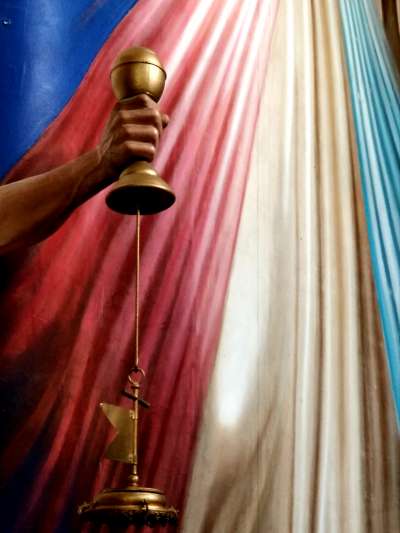