This month, I performed with this group whose shows consist of teaching large groups of total strangers a song arrangement that they then all sing together.

Usually, Daveed from the group teaches the main melody, arrangement and harmonies to the audience and then he and Nobu guide them, but last night the lead was handed off to me on the Bowie song “Heroes.”

We did it in the lobby of the Public Theater…not a real venue or stage, but it worked fine.

Daveed first comes on stage and does some warm up—He and Nobu (who conducts the “audience”) tell jokes and get everyone comfortable, then they ask everyone to sing along to a song that everyone knows. No arrangement or parts learned at this point—just singing along. No pressure. They did Bowie’s “Space Oddity,” which everyone joined in on, all singing along with the lead. It was not only a nice vocal warm up, but psychologically it got everyone used to the idea of singing in front of others and gave everyone a taste of the physical and psychological euphoria to come.

What happens when one sings together with a lot of other people?

A couple of things I immediately noticed. There is a transcendent feeling in being subsumed and surrendering to a group. This applies to sports, military drills, dancing… and group singing. One becomes a part of something larger than oneself, and something in our makeup rewards us when that happens. We cling to our individuality, but we experience true ecstasy when we give it up.

The second thing that happens involves the physical act of singing. I suspect the regulated breathing involved in singing, the act of producing sound and opening one’s mouth wide calls many many neural areas into play. The physical act, I suspect, releases endorphins as well. In singing, we get rewarded by both mind and body.

No one has to think about any of the above—we “know” these things instinctively. Anyone who has attended a gospel church service, for example, does not need to be told what this feels like.

So, the reward experience is part of the show.

The Choir! Choir! Choir! show is quite a full-on elaborate set up! There is a lighting person, full rig and light board (they had to install a truss and lights in the Public lobby! I was told these were actually set up for another show so they kind of piggybacked on that). There is an audio person for live sound and another for the recording—and a video crew. So, though it all seems very casual and most of that is invisible, it's a bit of a production.

It seemed fitting that in the present era much of the event/experience is about getting a good recording/video "take", with a view to that being what gets posted online. One could be cynical and say it takes us out of the moment, but the recording aspect also seems to have the effect of making the audience hunker down and take it more seriously. And it makes people put their phones away! “We’ll do a better video than anything you can make,” Daveed said at one point.

Procedure: Daveed and Nobu are on mics as they warm up the crowd. After the casual sing-along, they divide the crowd: high singers on one side, low on the other. Last night this was not super strict, but I was told Daveed can often hear someone singing off, or in the wrong octave, and will point them out, "Sir, you are NOT a soprano, please go over to the other side!"

The assigned song is rehearsed over and over. Everyone is given lyric sheets, but not expected to read music. I came early and rehearsed with them in the afternoon, then in the evening. They taught the audience their parts for about 45 minutes. They run it down with them for a bit, then I join and we all continue to do it (and it keeps getting better!) over and over.

Nobu is an amazing conductor. I asked a friend how that experience was and was told that “he makes you feel safe… his arm movements often follow the shapes of the pitch—up and down—and he gives looks and gestures that anticipate changes in the arrangement." A look and a body lean will let everyone know “heads up, the next section is coming up in 3 seconds”.

No one in the audience left the room, despite all of this being a lot of work. In fact, people leaving shows in the other theaters in the building often stopped and joined in—a testament to the joy of losing oneself in a mass, combined with the endorphins or whatever is released by the physical act of singing. One man told me that by the 3rd take, the hair on his arm stood up.

Did everyone in the audience/choir really sing?

I’d say yes… I have since run into about a dozen people who were there and the first thing I asked them was always “did you sing?," and they all responded with an enthusiastic “yes”.

What if you have trouble remembering harmonies/parts/arrangements?

A friend told me she felt a little apprehensive about that, but she soon discovered that there was always some confident singer nearby, within earshot, who seemed to remember it all, and one simply used them as a guide.

Well, it has to be something familiar—participants get lyric sheets but aren’t expected to be able to read music. It can’t be too difficult. My own thought on “Heroes”, the song we jointly agreed to do, is that given the structure of the song, it would probably build nicely—we’d possibly get a big triumphant climax, (ahem) which we did. I also had a hunch there MIGHT be a tiny subtext in doing that song, given the present state of the world and nation. An unspoken subtext, but one felt nonetheless—I believe that happened too. People confirmed it to me afterwards. I felt it. 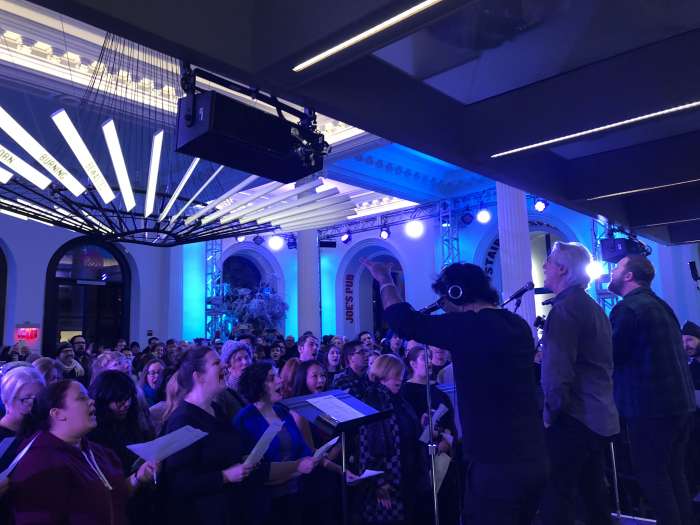