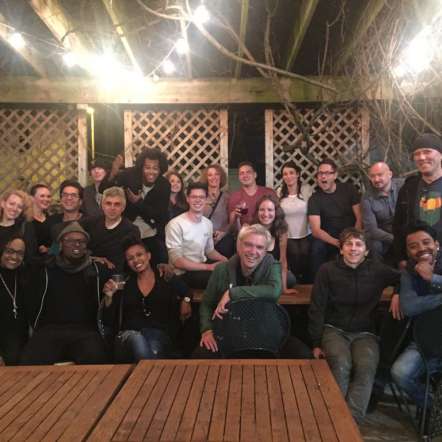 This month's DB Radio features favorite songs from some of the American Utopia band, crew and creative team—from the folks who designed the show to those who are out on the road installing the massive chain curtain. Those that ensure that the audio and lighting wireless systems work and the MVP who makes sure the percussionists have the correct instruments on their rigs for any given song. Those who are driving the busses and the handful that make sure everyone knows where to be and when. Our wardrobe team who keeps the band freshly outfitted night after night. The guys out there in front of house controlling the lights and what you hear in the room. And, of course, the amazing band—those who are playing instruments, those who are singing and those who are dancing.

Here are some of American Utopia family's favorite songs—hope you enjoy!

I've played and sung with Heather for something like 15 years in NYC, but it wasn't until I recently moved to New Orleans that I really understood her music. There's a deep, nomadic longing in this particular track that not only mirrors the meandering Mississippi (on which Christian was raised) but also my current touring experience. I find myself listening to this track while looking out the bus windows trying to name constellations. - Chris Giarmo, Dance Captain and Background Vocals

When I was very young I remember we had records in our house and I would listen to a couple of songs on repeat like 30 times, one of these songs was this Gilberto Gil called "Aquele Abraço," that talks about Rio de Janeiro, and some memorable places in Brasil. I think Gil wrote this song when he exilled in London, so he was longing for Brasil, and wrote this songs saluting all these people and places that he missed. - Mauro Refosco, Musical Director Percussion

One of the freshest things I heard recently. - Bobby Wooten, Bass Guitar

Ghanaian Highlife that is guaranteed to get everybody moving and feeling good. - Daniel Freedman, Percussion

I suppose there doesn’t need to be any explanation why I love this song! - Annie-B Parson, Choreographer

Gilberto Gil is my favorite artist of all time. I grew up listening to his music and "Refazenda" is one of them I like most because it always brings back great memories of my childhood. - Davi Viera, Percussion

One of first Ali Farka tunes I fell in love with... - Tim Keiper, Percussion

The live version of "Radioactivity" by Kraftwerk from the years just after they started using laptops on stage and before the ipads. Best show I ever saw. - Rob Sinclair, Lighting Designer

Visiting Moog Music in Asheville, NC whilst on tour earlier this month brought me back to the hypnotic, metronomic rhythms and the unmistakably synthetic and elastic sounds that reverberate across this track. - Sam Augustus, Blaktrax

I love the drone harmonies of this song and the fact that the main hook doesn’t come in until later in the song. Reminds me of the Stone Roses’ “I am the Resurrection” outro section which is an epic instrumental. Guy Garvey is a modern wordsmith and doesn’t try to hide his Manchester accent when singing! - John Chadwick, Monitors

Song that’s equal parts about feeling dark and the strong bonds of friendship that can get you through it. For me, touring has all of this. - Abigail Lester, Spare Hands